React vs Angular: Differences Figured Out with Expert View

React vs Angular: Differences Figured Out with Expert View 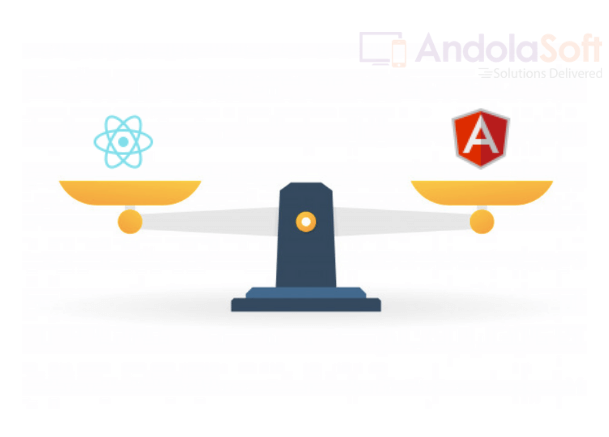 Choosing a front-end development framework and library won’t be that easy. Out of two popular JavaScript frameworks and library called Angular and React – which one will be the best choice for your existing or next project?

Each of them has special offerings, making it difficult for you to choose one from them.

Whether you are a newbie developer looking for where to invest, a freelancer finding the right framework for an upcoming project, or an enterprise-level architect working on the company’s strategic vision, Angular vs React comparison is a must.

It is more likely to benefit you by bringing out all differences from a professional point of view.

Let us be frank that, the best choice among React and Angular can’t be upright. It considers many factors to decide which technology is less or more suiting your development environment and purpose.

Since there is no direct answer to the question “React vs Angular – which one is best”, you will have something different in this post.

You will have detailed comparison between Angular and React, showing you how to tackle the issue of comparing any two JavaScript frameworks in the most structured way and conclude the best based on the findings.

Before selecting any of these two tools, you should find the answer to two easy questions: “Can it be a good tool independently?” and “Will it go well with my purpose?”

Neither of the answers will give any hint if considered individually, so you need to consider them both for a choice. Well, the above two questions might contain a whole lot of other small questions in each, so let’s discuss about them.

Questions asked about the goodness of the tool individually:

With all these questions, you can judge the efficacy of any tool, and they will play a part in comparison of React and Angular here too.

Another important point to keep in mind is it is unfair to compare React to Angular, since React is just a JavaScript library whereas Angular is an advance, feature-rich open-source framework.

To equalize, we’ll speak on some of the JavaScript libraries that are widely used with React.

Another key consideration for a qualified developer is to go for the perfect balance between tested, tried approaches and assessing new cutting-edge technology. As a standard rule, you need to be cautious when choosing a tool that is not matured enough due to some issues:

To summarize, neither React nor Angular is ahead with a great margin when it comes to maturity level.

You can’t make any decision based on this sole factor rather you need a few more technical factors to consider and compare before picking one to use in your case. In brief, the React vs Angular comparison should be more technological.

React at a Glance

React or ReactJS, whatever you are comfortable calling it, is a JS library useful in building User Interface (UI) components and their variants. It supports both front-end and server-side development.

React is normally used for managing the mobile or web apps’ view layer. It also enables you to build reusable UI components in different sections of the application.

It is presently one of the favorite JS libraries with a solid knowledge base and a vast community to support users.

React is a product of Facebook and mostly used in its internal projects, such as WhatsApp, Instagram etc. It is a library which has been accessible since 2013, so there is no question of it being new in the industry.

React has also won star ratings on GitHub for its popularity.

Use of React in Companies – Uber, Airbnb, Netflix, Atlassian and Dropbox.

Angular at a Glance

Angular was introduced to users by Google in 2016, proving it to be a little younger than React, but you shouldn’t take it as completely new to the industry.

It is a fully-featured JS framework useful in creating single-page as well as dynamic web applications. Angular also follows the MVC structure.

Another plus point of angular is that it gives developers the freedom to clearly and briefly express the app’s components with the use of HTML-based template syntax.

Angular has been used in hundreds of Google related apps such as Google Analytics, Firebase Console, Google Cloud Platform, Google Express, and more so far.

It is known for providing users with a lot of consistency and supporting them with its huge community of OS developers.

Use of Angular in Companies – Forbes, VMWare, Upwork, and others.

It is universally known that React has less out of the box features than Angular. However, it can be boon or bane, based on how you take it.

Some important features are common in both of these frameworks: components, two-way data binding, and framework-agnostic approach.

When React can be a Perfect Choice?

React will be the right framework to choose for your app development in the following cases:

When Angular can be a Perfect Choice?

Angular versions differ from each other in features. 5 and 6 versions have backward-compatibility packages with Angular 2 and 4 versions.

The newest versions, such as Angular 5, 6, 7 and 8 come with upgraded features to accelerate the development process and cut down costs. The version 5 that will be the right framework to choose for your app in the following cases:

React and AngularJS would be great choices with regards to single-page app development. Both of them have their own bad and good sides. It’s difficult to get a clear-cut answer on which platform you should choose.

After all, the comparison is not done here in any specific perspective. There might be times when you come across statements like AngularJS is better than React and vice versa. The final choice is something you will have to do on your own.

Regardless of the personal opinion of your developer friends and colleagues on React Vs. AngularJS, you should make a choice based on the size, complexity, features, functionality, and usability of your project.

Article Name
React vs Angular: Differences Figured Out with Expert View
Description
Here is the core comparison between ReactJS Vs AngularJS to let choose the best one for your web and mobile application development.
Author
Jay
Publisher Name
Andolasoft

Why Angular is so Popular in Modern Application Development